The Melkites, or Byzantine rite Catholics of Middle Eastern origin, are the descendants of the early Christians of Antioch (Syria). Christianity was established in this area of the Middle East by St. Peter before he traveled on to the imperial city of Rome. In the 5th century, there arose some teachers who said that Christ was not truly God and truly man as well. They would not accept the teaching of the Catholic Church as defined by the Council of Chalcedon (451A.D.) Those in the Middle East who did accept the decision of Chalcedon followed the lead of the Byzantine emperor and were dubbed Melkites or King’s Men from the Aramaic word “melek” meaning King. 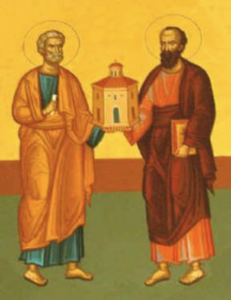 MELKITES ARE MEMBERS OF THE CATHOLIC CHURCH.

Antioch was one of the first cities to become a center of the Christian faith. It was in Antioch that St. Paul started his first apostolic journey, and before Peter was in Rome, he was the head of the Church of Antioch. One of the most important Antiocheans of the earlier church was St. John Chrysostom.

In 325 A.D. at the Council of Nicaea the patriarchates of Alexandria and Antioch were established. Like the patriarchate of Jerusalem (Council of Chalcedon 451 A.D.) Antioch was both a territorial and juridical entity. The government of the church was held by the Sees of Rome, Alexandria, Antioch, and Jerusalem. The bishops of these sees were given the title of Patriarch. After the capitol of the Roman empire was moved to Constantinople, that city was also elevated to a Patriarchal see (381A.D.) and given the ranking of “second only to the See of Peter” (Rome).

With the seventh century onslaught of the Islamic conquest of the Middle East, the Melkites found themselves under non-Christian domination. During most of this first Islamic period the Melkites were well treated as a “protected people, but they were frequently denied all civic and social responsibilities. When the Byzantine Empire re-conquered the Middle East, the fashions of Constantinople were incorporated into the liturgical life of the Melkite Church. Between 960 and 1085 A.D. much of the imperial style of Constantinople became a part of the Melkite ritual. Despite the now close ties to Constantinople, the Melkite peoples never broke off relations with Rome and with the Pope.

The great strain between the Melkite Church and Rome happened because of the Crusader. When the Western Catholics came into the Holy Land they did not recognize the legitimacy of the Eastern methods of worship. In the worst cases marauding Crusaders ransacked orthodox churches, and at best cases they simply installed Latin patriarchs and bishops usurping the local control of the church. By the end of the Crusades there was an estrangement between the churches, but the Melkites never actually broke off relations with Rome.

The reign of the Mamelukes from 1250 to 1516 put an end to the Western occupation of the Middle East but it also brought harsh reprisals on the Christians of Anitioch. Sustained destruction of religious sites, persecutions of clergy, and massacres of faithful led to a depopulation of entire Christian communities. For at least two centuries after the Ottoman conquest in 1516, the persecutions continued unabated. The Turkish sultan wanted his capital, Constantinople, to be the religious capital of the East, so he gave the Ecumenical Patriarch complete authority over all the Melkite hierarchy. Although the Antiochean church was under the direct control of the Orthodox Church, the Melkites managed to maintain some links to Rome. Because the Melkite patriarchs were chosen from the local clergy, the church remained in union with Rome while under the direction of Constantinople. Some of the Melkite hierarchs were more disposed to Constantinople, while others favored the authority of Rome – but as “the church in the middle,” the Melkites retained their allegiance to the Holy See.

In the 1600’s western missionaries to the Middle East found fertile ground among the Melkites who were eager to obtain an educated clergy. Soon the Jesuits, Capuchins, Carmelites, and Franciscans were educating and preaching the Word to a Melkite faithful starved for religious resources. . In 1709 Patriarch Cyril V formally recognized the authority of the Pope of Rome as the head of the Church. Some of the Antiochean faithful looked to the West for salvation of their church, while others only saw the missionaries as outsiders who did not understand their eastern customs, ancestral laws, and had not gone through the centuries of deprivations. As a result in 1724 the church split in two. One faction under the influence of Constantinople became known at the Antiochean Orthodox, while the other group, loyal to Rome, became known at the Melkite Catholics.

Since the formal declaration of Roman/Melkite union in 1724, the Melkite Catholics have worked steady to be a “voice for the East within the Western Church.” Melkite Patriarch Gregory Joseph spent his thirty-three years working for union of the Churches while striving to maintain the Eastern traditions and rituals. His was a significant voice during the deliberations of the first Vatican Council and he was an important influence on Pope Leo XIII’s Orientalium Dignit. During Vatican II, it was Melkite Patriarch Maximos IV who spoke on behalf of the “absent brother”, the great Orthodox Church. And so, today, the Melkite Catholics are a small but vibrant voice within the Catholic Church; a voice calling upon the dignity of the orthodox faith and praying for the unity of the church of Christ.

THE ROLE OF MELKITES IN THE UNIVERSAL CHURCH

Melkites serve as a witness to the Roman Catholic Church. We have, for centuries, maintained such practices as a married clergy, the election of bishops by the Church as a whole, collegial government and so forth. Many of these features are unknown to Roman Catholics and many Catholics feel that our practices may be more suited to today’s world than their Roman counterpoint. Our presence is a witness to the universality of the Catholic Church.

Melkites also serve as a witness to the Eastern Orthodox Churches. To the extent that we are true to ourselves, we exist as a living example that one can be true to a different heritage and yet be truly Catholic, i.e. in communion with Rome. Thus we exist as an example, for good or bad, of what other Churches can expect if and when they too achieve a union with the Church of Rome.

Melkites also provide a different option for people searching for Christ. Any church exists to bring its people to Christ. There are many for who the ‘style of Christian living’ practiced in our Church is more compatible than contemporary Western forms. For these people the Melkite Church can serve a very important function; it can be their way to God.